A set of node-red nodes for interacting with reddit.

Combine with other nodes to make reddit bots, scrapers and other cool stuff. 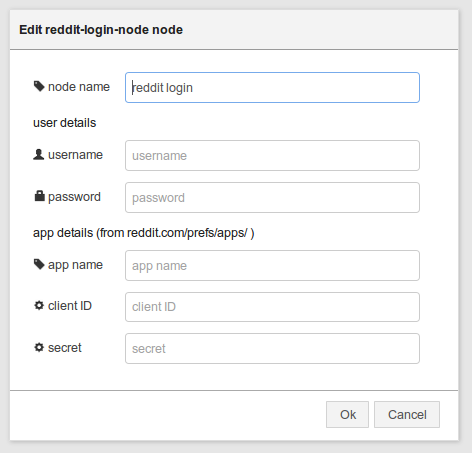 To get the log in credentials, you have to make an app for the account you want to control.

Go to your apps page and create a new app with this button:

Set up your app and check the 'script' radio button. The redirect URI is required but unused, so make it anything you want. Click create app.

Fill in the details in the node edit dialog.

'client ID' is the string below 'personal use script'.

If all of the details are correct, on recieving a message, the node will log in and send the original msg object it recieved.

Nodes which require authentication, such as the post to sub node, can now be used.

Note: The details in this example are not valid.

For examples and ideas see crazy-codes.com/node-red-stuff