A contributed Node-RED node, that queues undeliverable messages to file for later delivery.

A contributed Node-RED node, that queues undeliverable messages to file for later delivery.

This node is most valuable for Node-RED installations that have unreliable network connectivity. Messages that can't be delivered, are instead queued on disk until communications are again restored.

If an outbound Node-Red node, such as an MQTT node goes offline, subsequent messages are lost until the node reconnects. By wiring a Queue node ahead of the outbound node, and wiring status messages into Queue, undeliverable messages will instead be queued to a local file.

When the outbound node reconnects, Queue will forward on messages from the queue in the same order they were received, until the queue becomes empty or the outbound node again goes offline. While Queue drains the queue of messages, any new messages that arrive are appended to the queue to ensure ordered delivery is maintained.

Once the queue becomes empty, and the outbound node is still connected, Queue will again forward on messages and bypass the queue storage entirely.

Install node-red-contrib-msg-queue by following the adding nodes instructions from the Node-RED Getting Started Documentation.

The following instructions use npm at the command line.

An example-flow.json is available that matches the illustration in the overview. You can copy and paste this flow into Node-RED and tinker to get a feel for how it works.

Or if you prefer, read the following explanation and view the screen shot. 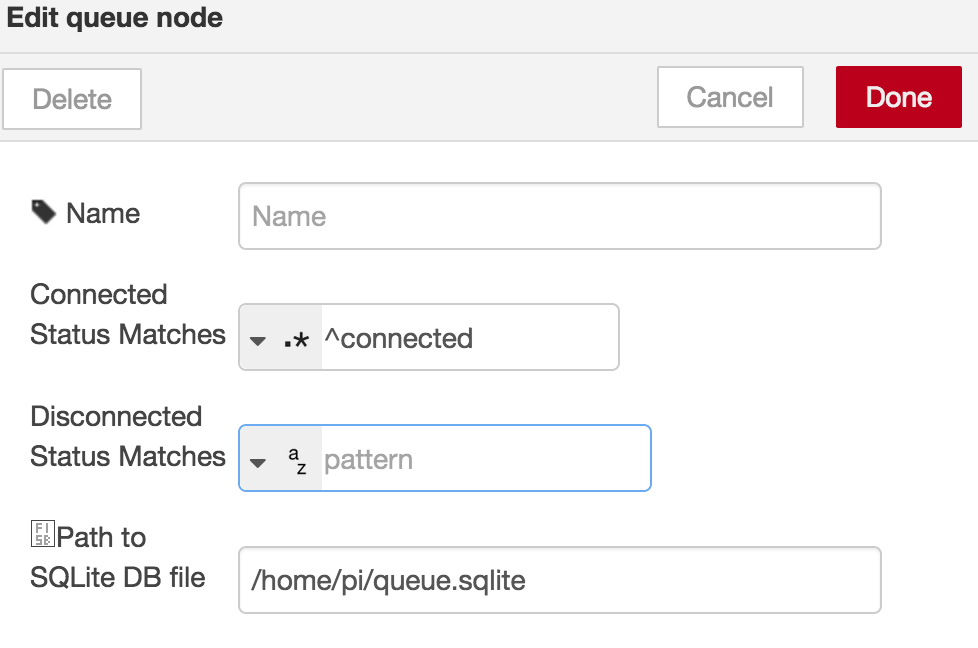 You must also specify a filename for the sqlite database that stores queued messages during a disconnected state. This database file must not be shared between multiple queue nodes.

Node-RED is a visual tool for creating event-driven applications.

A project of the OpenJS Foundation.