It currently only supports writing to the chip. Though you can request a status which will generate a message per pin on the current state.

NOTE The outputs are inverted:

This is because I'm working with Sainsmart relay boards. See to-do below!

In order to use this module with the Raspberry Pi running Raspbian you have to have node.js and node-mcp23017

install via npm. just type the following in the terminal/console

This workflow shows a number of possible triggers feeding the common hardware interface node. The hardware is controlled via the contened of the payload (ON|OFF) and the Topic provided.

The topic path is not important, except it must end in a number 0..15 or the words ALL or STATUS.

These require a payload containing either "ON" or "OFF":

Status does not need or rather ignores the payload:

When the status topic is received, the node generates a message per pin as a json object and it can be routed out to MQTT as shown in the example above. 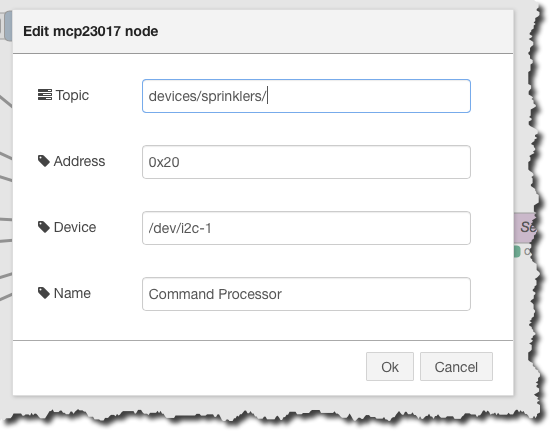 Example Inject to get status 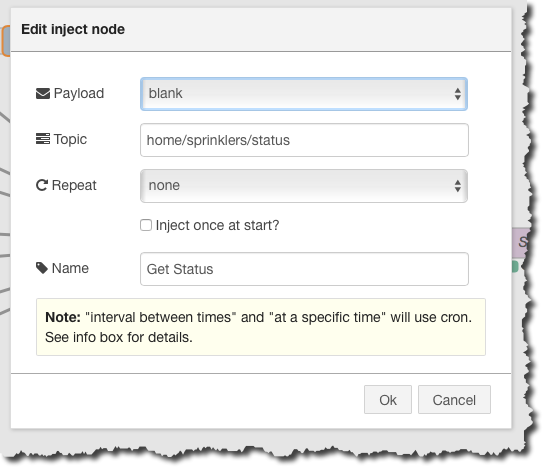 I want to add a checkbox to allow the ON/OFF to HIGH/LOW mapping to be inverted, to allow a more logical ON -> HIGH, OFF -> LOW.

3 in the last week