HomeSeer nodes to control HomeSeer devices and events from Node-RED

This software provides Node-RED nodes to control and monitor your HomeSeer devices and events. It is compatible with HomeSeer version 4.1.3.0 or later and Node-Red version 1.0 or later.

From the command line

Use the following command from within your user data directory (by default, $HOME/.node-red):

If the installation is successful, the new HomeSeer nodes will appear in the palette:

In order for Node-RED to receive device status updates from HomeSeer you need to setup a webhook URL. From the HomeSeer web interface go to Setup > Custom and add your Node-RED URL followed by /homeseer/webhook. For example if Node-RED is running on the same machine as HomeSeer, it should be something like http://127.0.0.1:1880/homeseer/webhook

Every HomeSeer node will have a HS Server property which must be configured. You only have to create this configuration once when you create your first node. 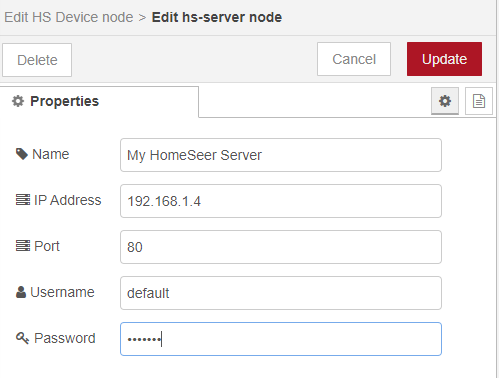 Username and Password are optional fields, but if in HomeSeer, Setup > Network > Web Server Settings > No Password Required for local Login is uncheked then you must provide a valid HomeSeer username and password. 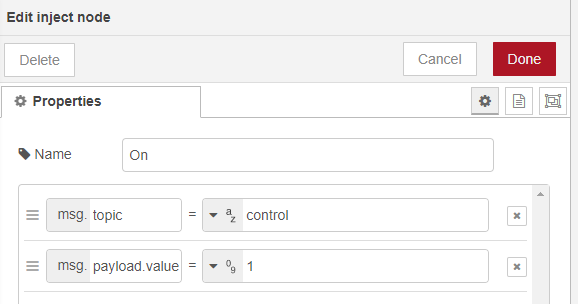 Updating a Device's value and/or status 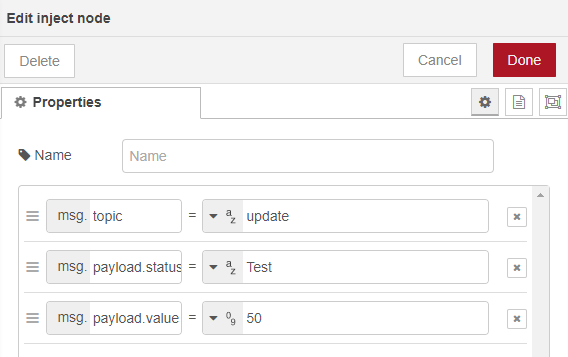 Every time the device value or status changes in HomeSeer the node will send to its output a message containing the new state of the device in msg.payload

If the node receives a message with msg.topic set to sync it will get the current state of the device from HomeSeer and send it to its output in msg.payload even if no changes has occured since the last update.

If the node receives a message with msg.topic set to report it will send to its output the last known state of the device without querying HomeSeer.

Node representing a HomeSeer Event. To run the event actions, this node needs to receive on its input, a message with the msg.topic property set to run