Node-Red contributed nodes for interacting with cec-enabled devices on a HDMI switch, such as a TV or digital receiver

Node-Red contributed nodes for interacting with cec-enabled devices on a HDMI switch, digital receiver and/or a TV - control and monitor your entertainment system using a Raspberry Pi.

The goal of this software is to make it easy for makers to automate interactions with entertainment systems via the HDMI CEC protocol, via the awesome Node-RED Framework.

To do this, it leverages the great work of:

It includes 4 nodes as follows:

Before installing this node-red module, you first need to install the cec-utils software from PulseEight. Instructions vary depending on your operating system and distribution. Complete instructions are available from the PulseEight Github Repo, or if TL;DR, quick guide follows:

See the MacPorts website if you don't have it installed.

Install node-red-contrib-cec by following the adding nodes instructions from the Node-RED Getting Started Documentation.

The following instructions use npm.

Or if TL;DR, as the user running Node-RED type:

A cec example flow is available that highlights all the features of this node, and is illustrated below. You can copy and paste this flow into Node-RED and tinker to get a feel for how it works. 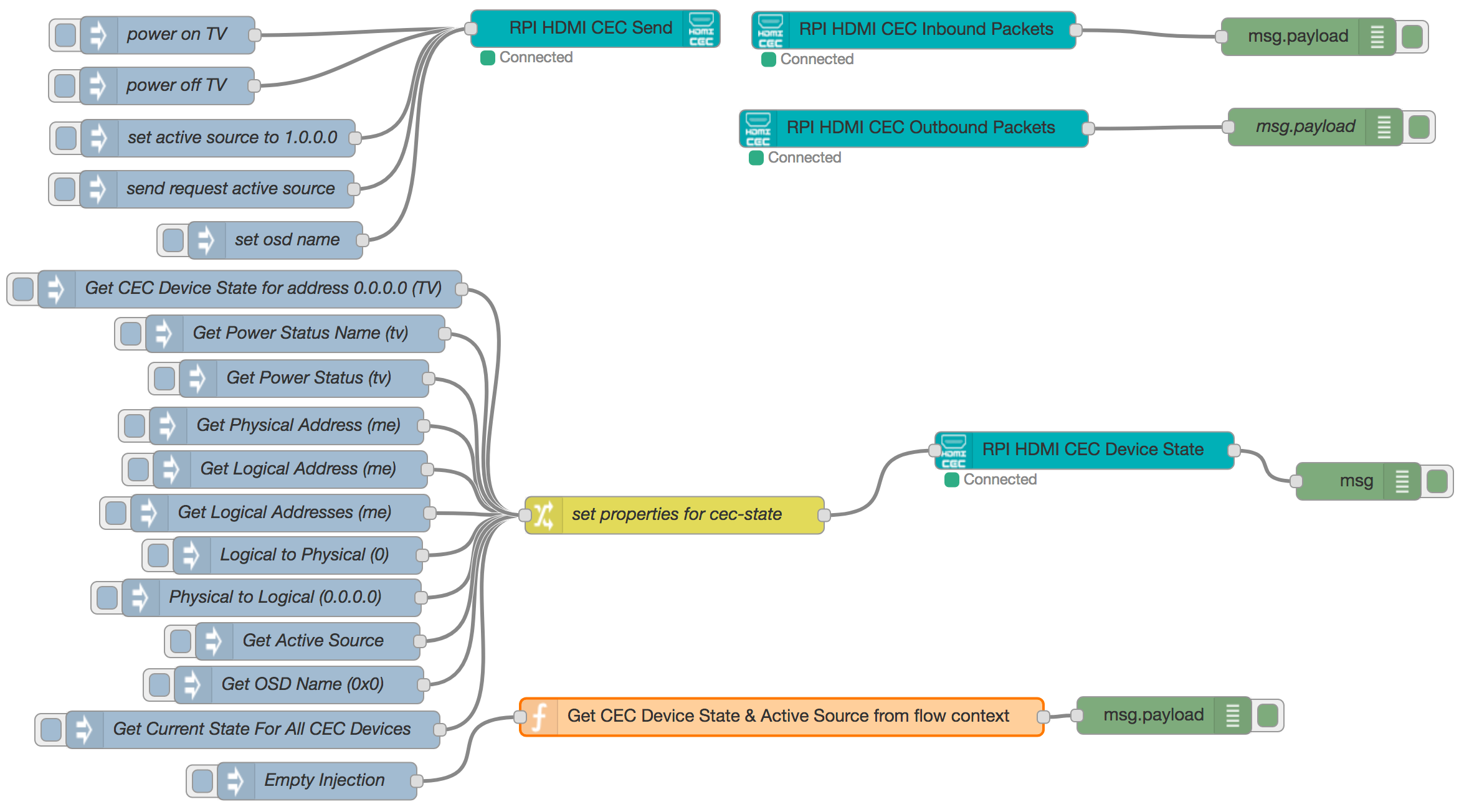 Or if you prefer, read the following explanation and screen shots.

When creating any of the above nodes, you must select or create a CEC Adapter configuration. This provides connection details for connecting to the cec serial port. 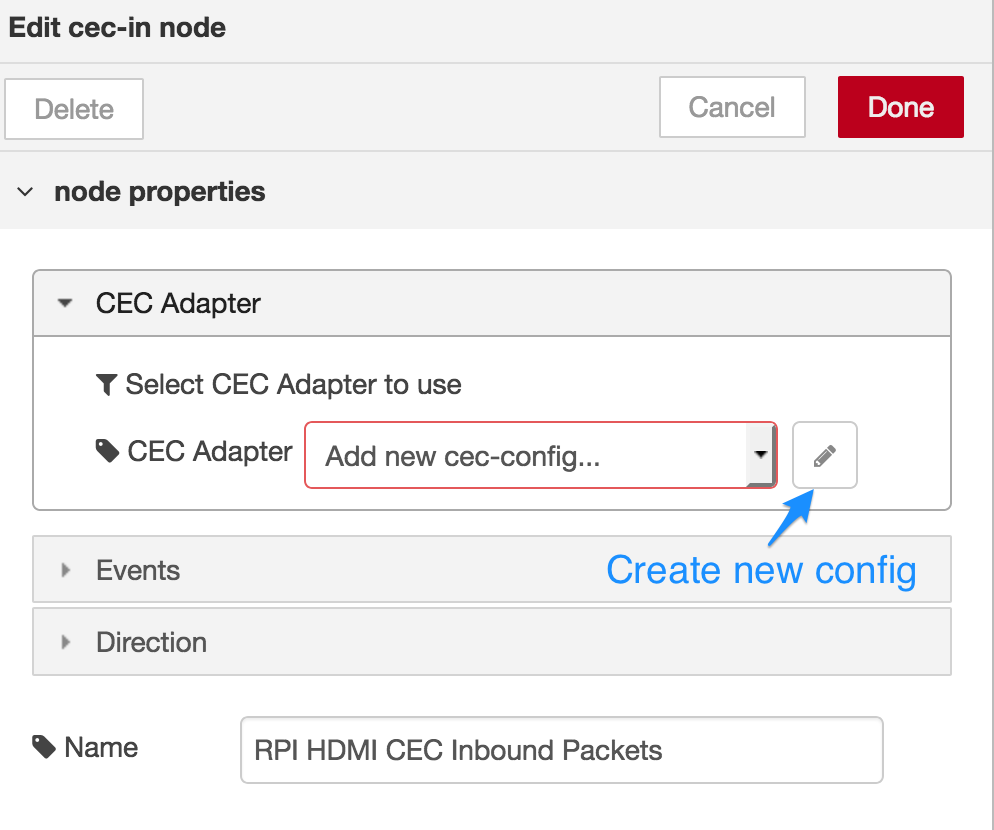 OSD Name is the name assigned to the hdmi device attached to the hdmi switch/bus. If a display such as a television sets this device as the active source, and if it supports it, this name will be displayed as a label for the device.

CEC Com Port specifies the name of the serial port to connect with to communicate on the HDMI CEC bus. If left blank, a search is performed and the first found port is used. The port name on a Raspberry Pi is "RPI"

HDMI Port refers to the physical HDMI socket on this device, and is relevant when there is more than one. Otherwise it can be left blank.

Player, Recorder, Tuner, Audio are different source classes that can provide images to display on the output device (.i.e television/projector). For this device, select all classes that apply, or simply choose "Player".

The cec-in input node receives CEC messages from the HDMI CEC bus for the adapter. The payload property of the outbound msg contains an object with the following example generic structure and values according to the cec-o-matic.com documentation. 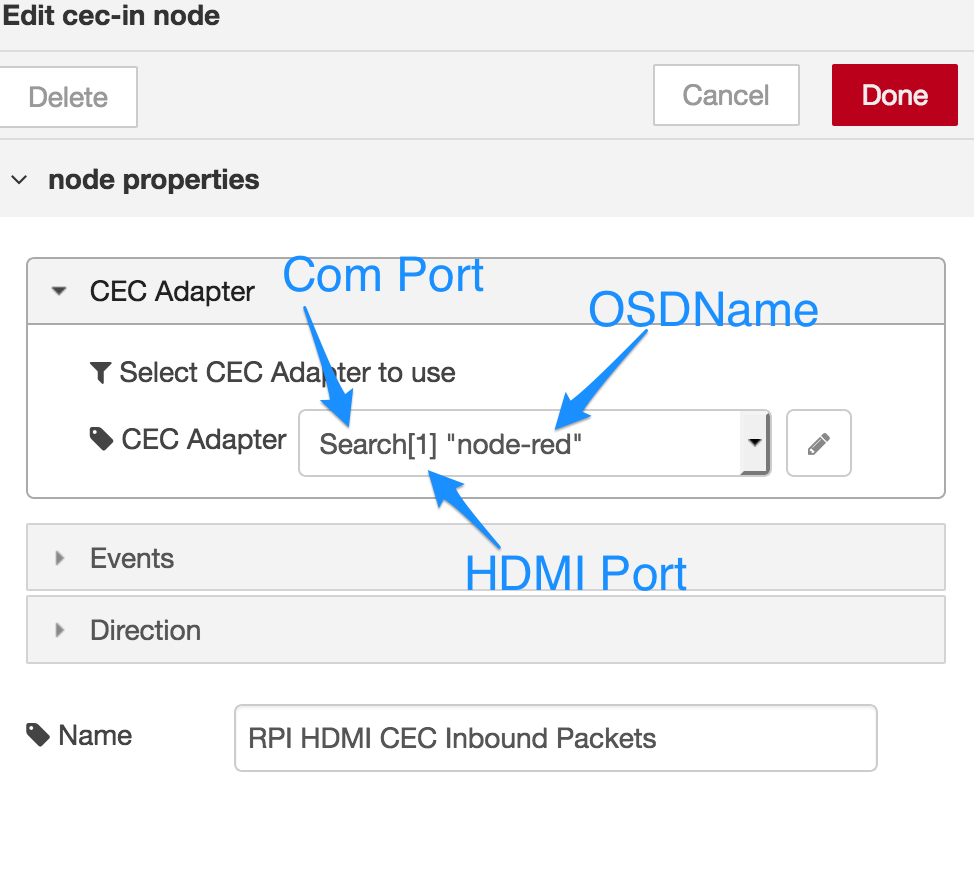 Select CEC Adapter - Select the Adapter to use, or create a new adapter configuration by clicking on the pencil icon.

Events - You may specify which events that are sent or received on the HDMI CEC bus to send from this node. You can select all events using the button at the bottom of the list.

This is an output node that receives CEC commands on its input to send on the HDMI CEC bus. 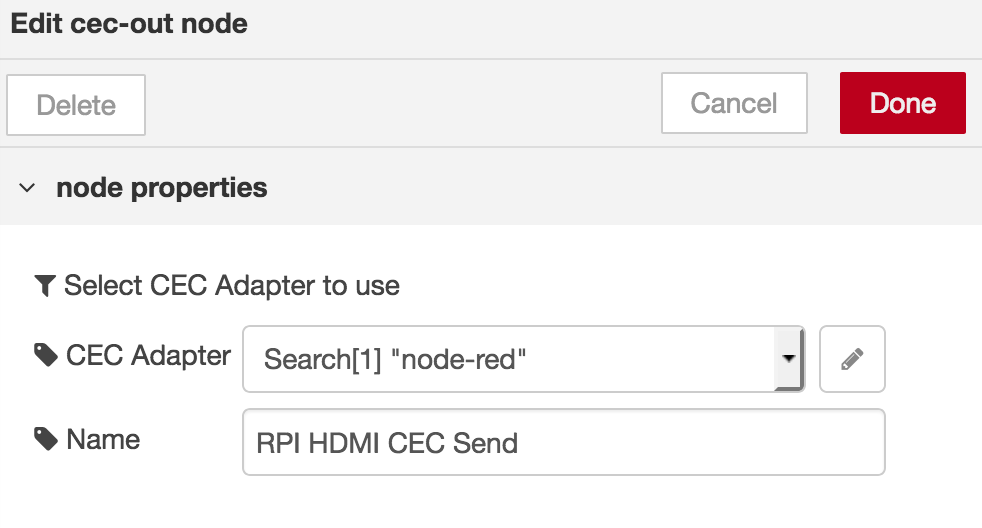 Commands to send should be specified in the msg payload property as an array of objects or if only a single command, then no array, just an object. As an example, the object should have the following properties/values:

The above example is a message from recording device 1 (logical address 1) to the TV device (logical address 0), to request that it power on, using opcode IMAGE_VIEW_ON (hex code 0x04, decimal 4). No arguments are required for this opcode, hence an empty array.

This same message could also be expressed with the following same commands:

As you can see, case is unimportant and you can also use numeric values for the codes, and string represenations in hexadecimal (e.g. "0x"). If no args are necessary for the opcode, then that property can be omitted. If you wish to use the logical source address assigned to your cec adapter, then source can be set as null or simply omitted.

See below for a full list of all the codes and an explanation of their function (reproduced from cec-monitor). My sincere thanks to Pablo Gonzalez for his work on cec-monitor, without which, node-red-contrib-cec would not be possible.

Also refer to cec-o-matic for further information on these commands and their usage.

This node tracks and stores the status of all the devices connected to the HDMI CEC bus by listening to the cec messages.

By sending a message to its input, you can query a particular device by its logical or physical address or, without an address, query state information of all logical addresses.

To query a particular device, specify in the input message, the logical (0 - 15) or physical address (of form 0.0.0.0) in msg.address as shown below:

If command is omitted, the default command is getstate. There are many other specific commands, such as:

which will return a string representation of the power status of the TV, like STANDBY.

Note, if any of the queries above are unknown, then null is returned.

If a specific address is requested for getstate, as follows:

then following js data structure shall be returned:

If a value for a specific address is not known, then it will either be set to null, or an empty string:

For getsource, if msg.address is omitted, then all devices' state is returned as an object keyed by logical address for all devices, as per below: 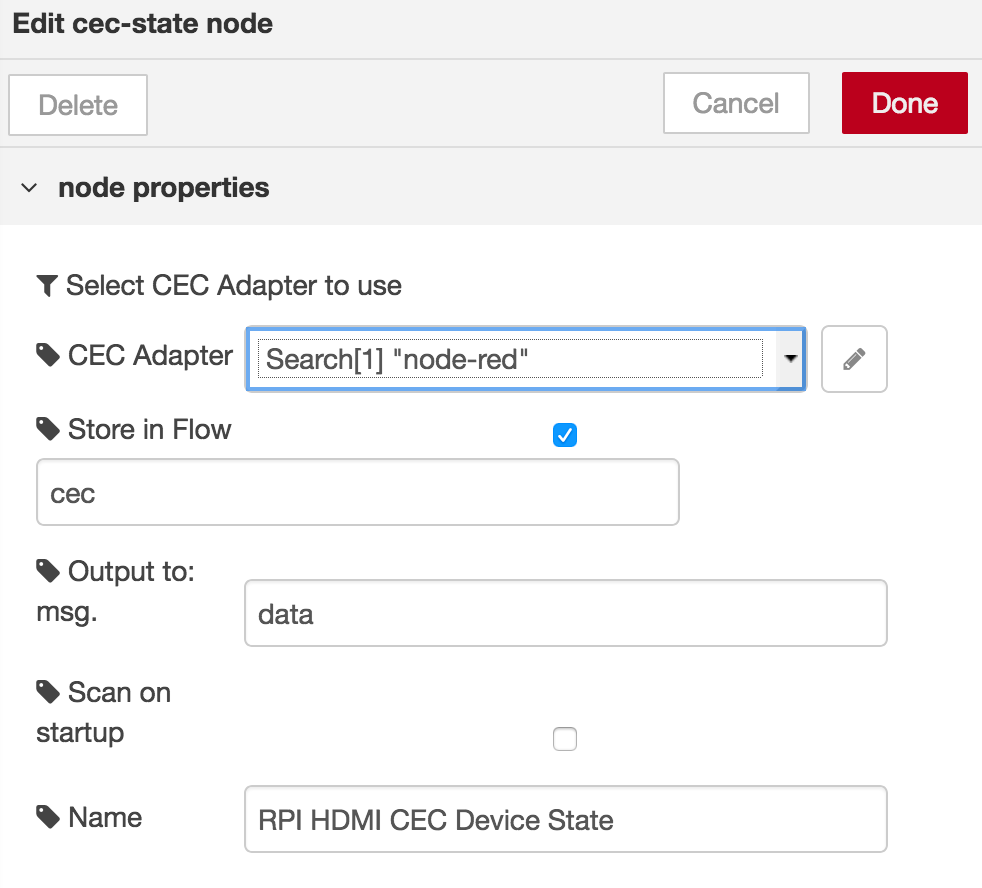 You can specify the property name to store the output in the outgoing msg object. By default, it will be stored in msg.payload but you can store it anywhere.

This will retrieve the on screen display name for the TV (logical address 0) and store it in the payload of the outgoing message from the function node.

This will retrieve the physical address of the currently known active source device.

Finally, you can ask the cec-state node to perform a bus scan on startup to try and identify all the devices attached to the display device (on the CEC bus). Keep in mind that if you have non-CEC enabled devices attached, the scan can cause confusion about which device is the active source. Your mileage may vary.

Node-RED is a visual tool for creating event-driven applications.

A project of the OpenJS Foundation.