Node-RED Nodes for the Homematic CCU

Node-RED Nodes for the Homematic CCU

With these Nodes you can connect Homematic and Node-RED. Homematic is a series of smart home automation hardware from the manufacturer eQ-3, popular especially in Germany.

For the communication with the CCU both RPC and ReGaHSS remote script are used. It's possible to connect to multiple CCUs from one Node-RED instance. RPC setValue calls can be comfortably complemented with ON_TIME and RAMP_TIME values and special nodes ease the control of displays and mp3 actuators. RPC events can be filtered comprehensively (even through regular expressions and also by rooms and functions). It's possible to start rega-programs and set rega-variables and last but not least there are nodes to execute arbitrary rega-scripts and RPC calls.

These nodes are included in RedMatic which ships Node-RED as an addon package for installation on a Homematic CCU3 or RaspberryMatic.

Some example flows can be found in the RedMatic Wiki (German language).

If Node-RED/node-red-contrib-ccu runs inside a Container or a VM with NAT'd network it's necessary to forward/expose the ports for connections from the CCU to node-red-contrib-ccu's callback listeners (example below for a Docker container: use options -p 2048:2048 -p 2049:2049in the docker run command). 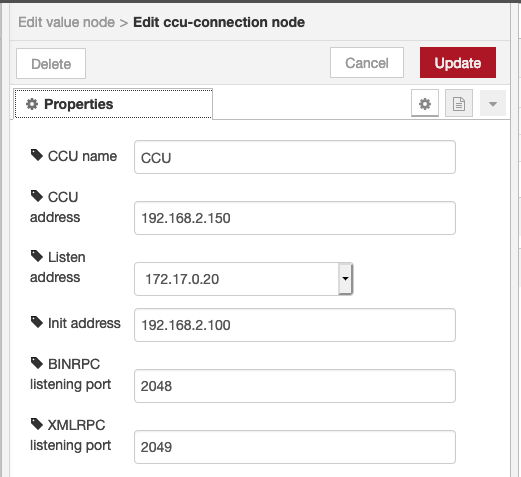 The config option Init addresswill be used to tell the CCU on which Address node-red-contrib-ccu is reachable. As 172.17.0.20 is not reachable for the CCU the Hosts IP Address and port forwarding/exposal has to be used. As Listen address setting also 0.0.0.0 (which tells node-red-contrib-ccu to bind it's listeners to all available interfaces) would be possible.

This example shows a configuration for piVCCU and Node-RED running in containers with bridged networking. 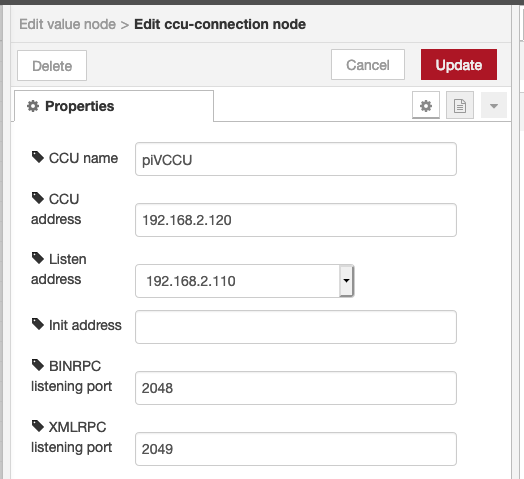 In this example both Node-RED and debmatic are installed on the same (possibly virtual) host. 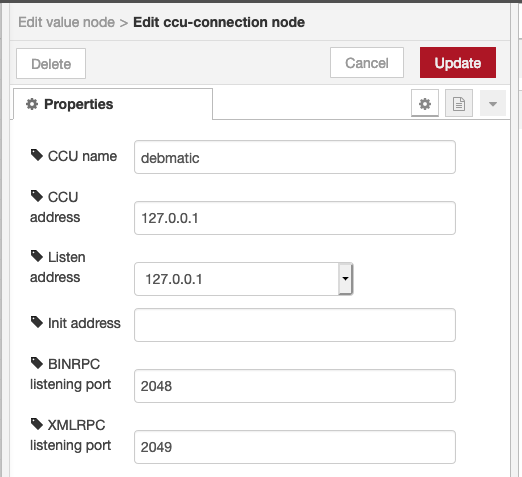 With the same logic as shown above, multiple CCUs can be managed within one Node-RED instance. This will require two individual configuration nodes, in which the respective connection setting are provided. 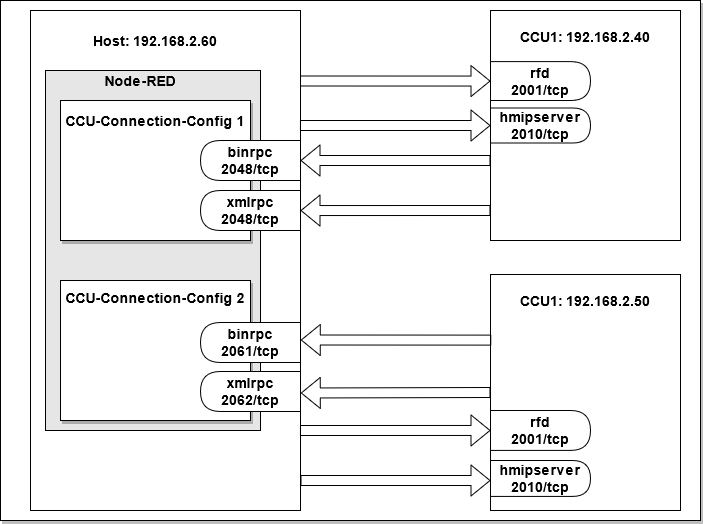