A Node Red node that offers a visual programming interface, to make programming a function node easier. Just drag and drop blocks to build your program logic, without having to write the Javascript code yourself. By building your code in a visual way, you don't have to learn the Javascript syntax, which makes programming very difficult for beginners.

Thanks to lots of people, for their assistance during the development of this node:

Please buy my wife a coffee to keep her happy, while I am busy developing Node-RED stuff for you ...

The performance of this node is identical to the standard Function-node!

Indeed the Javascript code will be generated once, when the content of the Blockly workspace has been edited. From then on that generated code will run on the Node-RED server side, using exactly the "same" sandbox mechanism as used by the Function-node.

When implementing your custom logic into a Node-Red flow, sometimes the available nodes won't be sufficient. In those cases the standard function node can be used, to implement your logic by entering custom Javascript coding. However to avoid having to write Javascript code yourself, you can draw your logic by dragging and dropping blocks into the Blockly editor. 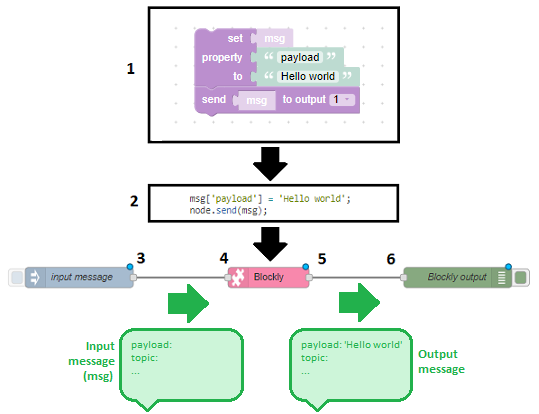 The following animation shows how this example flow can be constructed using the Blockly node:

Lots of other examples can be found in the wiki pages ...

Blockly is a visual block programming language (and editor), maintained by Google. A lot of documentation (tutorials, videos, ...) can be found on the internet, but here are some bascis to get you started:

The node's config screen consists out of a series of elements: 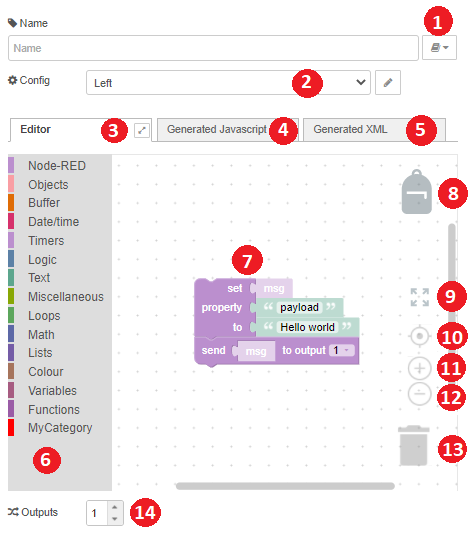 When writing Javascript code in a standard function node, some Node-Red functionality can be called from within that code (see function node API). To offer the same functionality in the Blockly editor, a series of extra blocks have been added. These blocks are availble in the 'Node-Red' category in the toolbox:

The Blocky workspace can be configured via the settings in the selected config node: 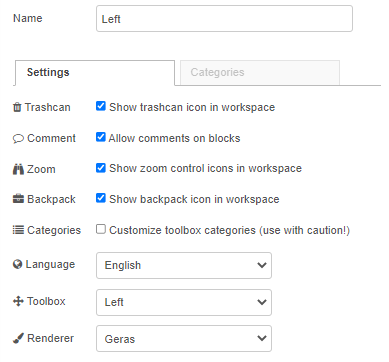 These settings will be applied to every Blockly node where this config node has been selected:

When you need a change in this node, you can create a new Github issue. A couple of remarks about this:

Need blockly in your own language ...

Google has already provided translations for all their basic blocks. However for our own blocks, there are currently only translations available in a few languages. If you want to translate the blocks in your own language, please follow these steps: