Guide for the ADS

Configuring I2C on the Raspberry Pi

This Node should work for any working i2c device on non raspberry pi based systems!

Install with node-red Palette Manager or,

To get a voltage or difference of voltage from a ADS1115 or ADS1015 analog to digital converter just select the correct setting for your device and trigger the node. 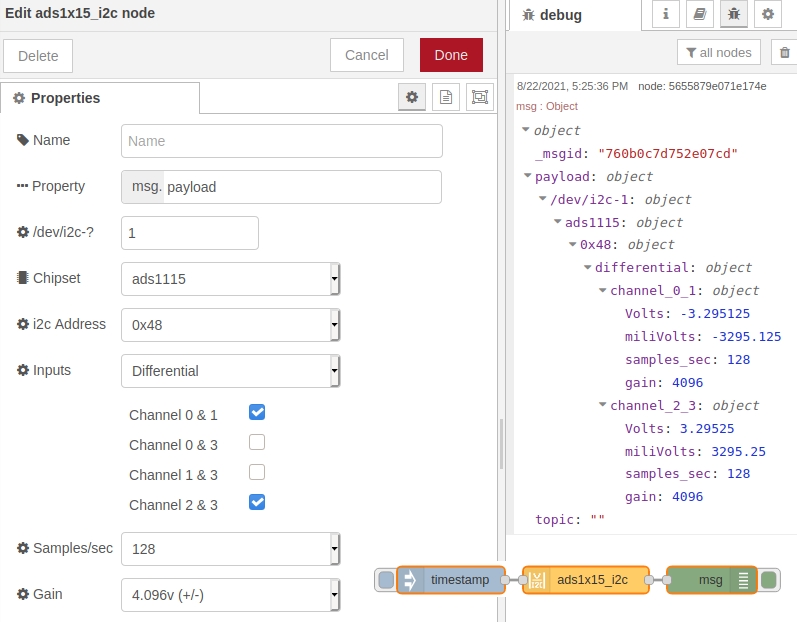 Define the msg name if you wish to change the name displayed on the node.

Define the msg property name you wish. The name you select (msg.example) will also be the output property

The payload must be a number! Anything else will try to be parsed into a number and rejected if that fails.

The Chipset by default is set to 1115. The Chipset is the version of ads supported. If you have an ads1015 select that option.

Select the sample per second you want your ADS to make. Higher rate equals more samples taken before being averaged and sent back from the ADS. Please see ads1X15 documentation for more information

I Select the Gain you want. To increase accuracy of smaller voltage signals, the gain can be adjusted to a lower range. Do NOT input voltages higher than the range or device max voltage, pi 3.3v use a voltage devider to lower input voltages as needed.

Thanks to Kevin Felix D Rodriguez Perez AKA felixdrp for his work on ads1x15. It made making this node for node-red possible.